Should I buy a G color diamond with very strong blue fluorescence?

“Hi Todd, I’ve been reading your site for a while now. Thank you for putting together such a great resource! I read your article Something Borrowed, Something Blue and really like the way the blue fluorescent diamond looks in the photograph.”

“I’m also curious about why the Brian Gavin Blue Collection diamonds cost less than the Brian Gavin Signature Diamonds. Any insight you can provide is appreciated. — Carl K.”

Effect of Blue Fluorescence on Diamonds:

For the record, Carl, I’m a big fan of diamonds with blue fluorescence. I believe that in most instances, very strong blue fluorescence is not going to have a negative impact on the beauty of a diamond. This is especially true with diamonds from the Brian Gavin Blue Collection because Brian oversees the selection process to ensure that the fluorescence is a positive factor.

According to a study conducted by the Gemological Institute of America, fluorescence negatively affects less than 2% of gem-quality diamonds; given the amount of attention that Brian Gavin dedicates to his selection process, I don’t think you have anything to worry about. Just the same, I called Brian Gavin and asked him to pull the diamond and take a look at it for me, and he told me that it was gorgeous!

The funny thing about fluorescence is that it tends to be something that the average person would never notice if they weren’t told about it by somebody in the trade… Blue Fluorescence generally has a positive effect on the beauty of a diamond, making it appear a little brighter and crisper looking than diamonds without fluorescence.

It should be noted, however that fluorescence can demand a premium for diamonds in the lower color ranges because of the positive impact that it can have on the appearance of the diamond; this is because trade members know what to look for and can see the positive effects which fluorescence has upon a diamond. 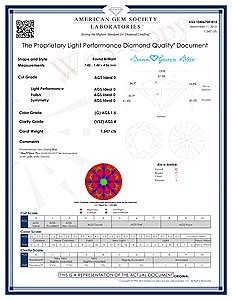 So I looked over the details for the 1.547 carat, G-color, VS-2 clarity, round brilliant ideal cut diamond, with very strong blue fluorescence that you are considering from the Brian Gavin Blue Collection, and everything looks great!

This is a diamond that I would purchase for myself, the proportions are in the center range of the spectrum for the zero ideal cut proportions rating, and the ASET image provided on the lab report looks spectacular!

The diamond has an overall cut grade of AGS Ideal-0 on the Proprietary Light Performance grading platform of the American Gem Society Laboratory (AGSL). It simply doesn’t get any better! And the inclusions look great, you’ve just got a couple of diamond crystals, a feather, and some pinpoint size diamond crystals, nothing to worry about.

Needless to say, I don’t think that you’d see a difference between the two diamonds if you were looking at them side-by-side under normal lighting circumstances… Obviously, the 1.547 carat puppy with very strong fluorescence is going to glow bright neon blue like a neon sign if it is exposed to blacklight, it will look really cool in a nightclub! And if you’re really paying attention, you might be able to detect a slight hint of lavender blue in the diamond if you look at it closely in direct sunlight because intense ultraviolet light can activate the fluorescent molecules, but beyond that, they’re going to look the same.