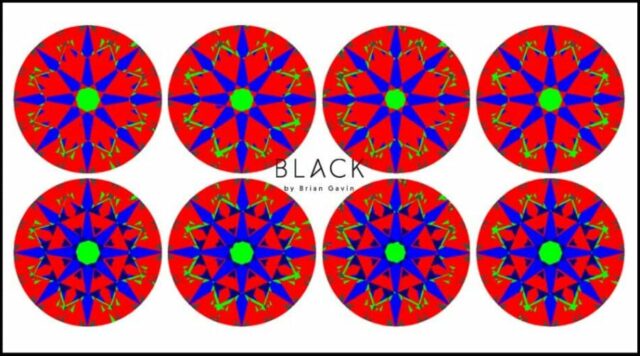 The Advanced ASET images above set a new standard of light performance for Black by Brian Gavin Diamonds. To be sure, this is going to shake the diamond industry to its core.

As a matter of fact, most of the industry is still reeling from the launch of Black by Brian Gavin. Be that as it may, Brian Gavin has done it again and hit another home run over the fence and this is what it looks like. 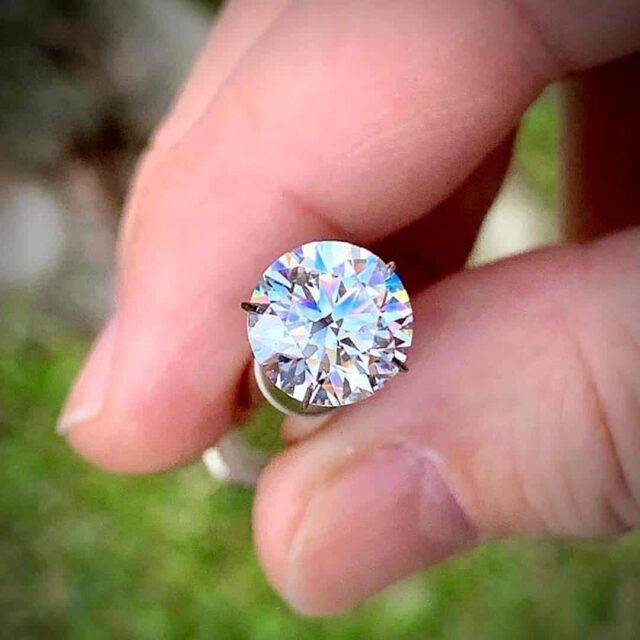 Brian Gavin is proud to announce that Advanced ASET is now available for Black by Brian Gavin Diamonds effective immediately.

In the first place, Black by Brian Gavin Diamonds represents many years of intensive research and study.

Consequently, the cutting process for Black is so unique that it is patented. Refer to U.S. Patent #10,405,618 for additional details.

Although this may be true, the issuance of a patent in itself does not make a diamond perform better. However, the reason why the cutting process for Black is worthy of a patent does increase broad-spectrum sparkle.

The premise behind the Black by Brian Gavin collection is the reduction of secondary brightness (green) under the table facet. That means that there will be a higher amount of primary brightness (red) visible in an Advanced ASET Scope image.

The abstract on the patent indicates that it is for precision hearts and arrows diamonds. At the same time, the diamonds will have an overall grade of AGS Ideal-0 for Light Performance.

In addition, the ASET image will be essentially free of green in the peripheral regions of the table facet. Brian Gavin's team is able to virtually eliminate the green table effect using special production methods.

The proportions for the Black by Brian Gavin Diamonds are also tighter than ever. The higher degree of optical precision coupled with the proportions results in spectacular light performance.

What Is Advanced ASET by the AGS Laboratory?

To begin with, the standard Light Performance-based diamond quality document (DQD) has only one ASET map. Whereas the DQD for the Black by Brian Gavin Diamond on the left features two ASET images.

The insight these two images provide is earth-shattering. Not only because of the in-depth perspective, but also because of what they represent.

Up to the present time, the image on the lab report has shown the ASET map from the perspective of 33.5 degrees. Which has always been interesting to me since the AGS Laboratory scans the diamond using two completely different settings.

As a matter of fact, the AGSL scans diamonds for light performance at 30 and 40 degrees. And yet, the ASET on the diamond grading reports shows the diamonds from the vantage point of 33.5 degrees.

Obviously, this is something that has never made sense to me since 35 degrees is the average of 30-40. Be that as it may, the AGS Laboratory has been publishing ASET Scope images based on 33.5 degrees.

Which is something that has been driving diamond cutters like Brian Gavin absolutely insane. After all, we all know that the original ASET research is based on scans taken at 30-40 degrees.

With this in mind, you might conclude that 33.5 degrees represent some absurd bastardization of the original calculations. In fact, you might be right and I'll openly agree with your stance on the matter.

As shown above, the AGS Laboratory created a new report for Black by Brian Gavin Diamonds. In the first place, the report format is as unique as the light performance of these diamonds.

At the same time, Brian Gavin's implementation of Advanced ASET resolves the 33.5 degree dome issue. In addition, being able to see the ASET at 30-40 degrees provides you with incredible insight. For the first time ever, you will know how your diamond performs under a variety of lighting conditions.

The lab report excerpt on the left shows ASET maps of the diamond at thirty and forty degrees. That means that lab reports for Black by Brian Gavin Diamonds now provide the most in-depth assessment of light performance. As a matter of fact, Brian Gavin is the first organization to implement Advanced ASET from the AGS Laboratory.

Let's take a look at the Advanced ASET images for this Black by Brian Gavin Diamond. On the condition that a picture is worth a thousand words, you might wonder about the green under the table. 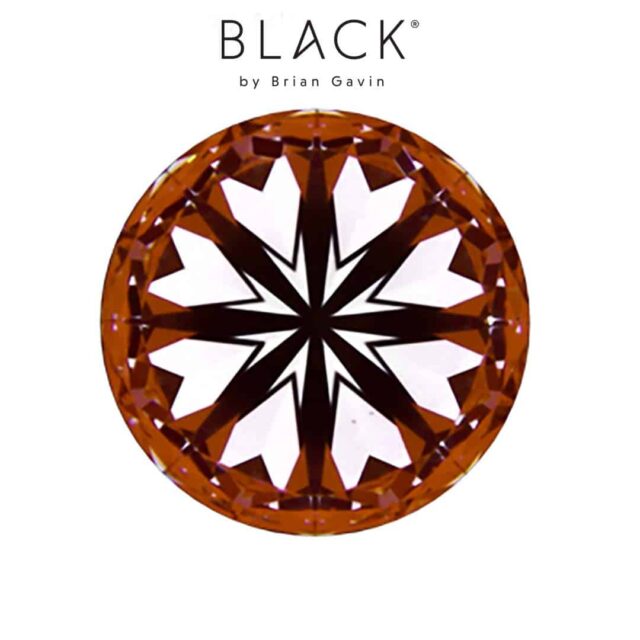 The Advanced ASET for Black by Brian Gavin Diamonds provides in-depth analysis of light return using typical and exaggerated contrast. This is done by viewing the diamond under ASET dome hemispheres of 30-40 degrees.

The new dynamic contrast image provides supplemental information about diamond brightness and sparkle factor. You may also use the Advanced ASET images to judge the degree of Optical Precision.

In other words, you can use the ASET images to determine how evenly light is reflecting throughout the diamond. After all, the overall distribution of colors in an ASET image is a reflection of optical precision.

The distribution of colors in an ASET will be more even in the event that the diamond is cut precisely. Implementation of Advanced ASET improves our perception of Light Performance.

In the same way that Black by Brian Gavin Diamonds advances cutting techniques for the modern age. With this in mind, it makes sense that Brian Gavin is the first to implement Advanced ASET on their reports. 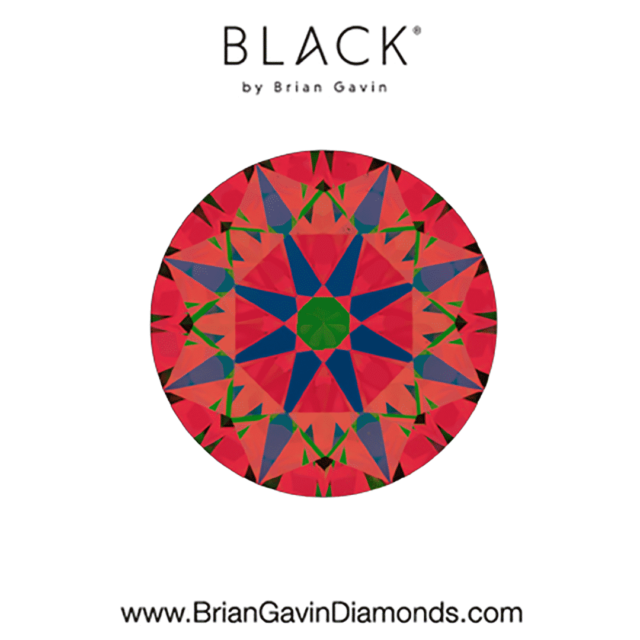 As you'll discover in this article on ASET Colors it's perfectly normal for the middle section to be green. The middle may be red or green given that the two colors share the 45-degree line on the ASET.

Be that as it may, Black by Brian Gavin Diamonds consistently exhibit more red under the table than other brands. At the same time, this is not surprising since that is the intent behind Brian Gavin's new cutting process.

The most compelling evidence that supports this claim is the lack of little green arrows under the table facet. Remember that the color green in an Advanced ASET Scope image is an indication of secondary brightness. 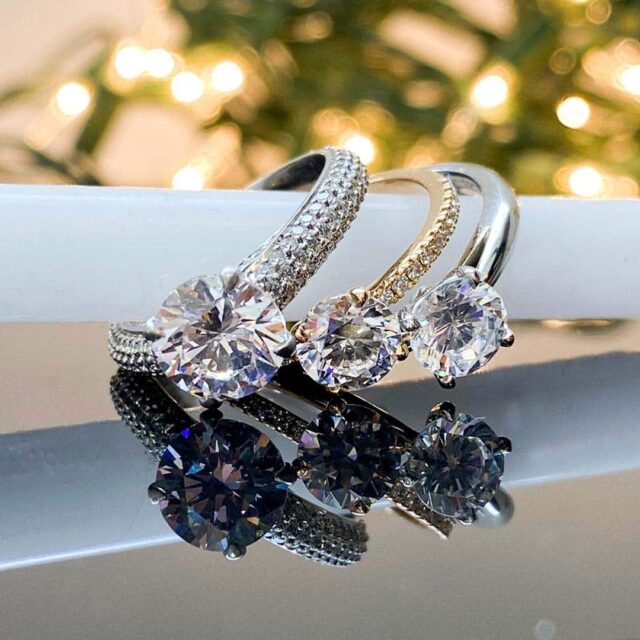 While the color green indicates light reflecting from the brightest light source in the room. With this in mind, you want to see higher concentrations of red with even distribution of greens outlining the facets.

It stands to reason that you can't teach a dog new tricks and not expect their overall performance to improve. That is why many Brian Gavin Signature diamonds exhibit degrees of light performance similar to the Blacks.

At the same time, the selection criteria for each collection will affect where a diamond appears in Brian's inventory. Please use our free Diamond Concierge Service if you want our help to create the perfect ring.

In the first place, you might ask yourself whether size really does matter? Because END_OF_DOCUMENT_TOKEN_TO_BE_REPLACED

Cool Down in June Brian Gavin Promotion."Do you have any Brian Gavin Coupon or END_OF_DOCUMENT_TOKEN_TO_BE_REPLACED

Spectacular Sparkle from Brian Gavin.First, it's a literary fact that diamonds sparkle and stars END_OF_DOCUMENT_TOKEN_TO_BE_REPLACED