Hearts on Fire Diamonds promote itself as the World’s Most Perfectly Cut Diamond relying on precise proportions and higher degrees of optical precision.

Our relationship with Hearts on Fire diamonds goes back to the mid-1990s when we were blazing the trail for selling internet diamonds.

At that time, one of the things which distinguished us from the rest of the pack was our focus on Hearts and Arrows diamonds.

The incredibly precise hearts and arrows pattern is visible when viewing a loose diamond through a specific reflector scope. It’s essential to realize that the pattern is only visible from the pavilion or bottom view. 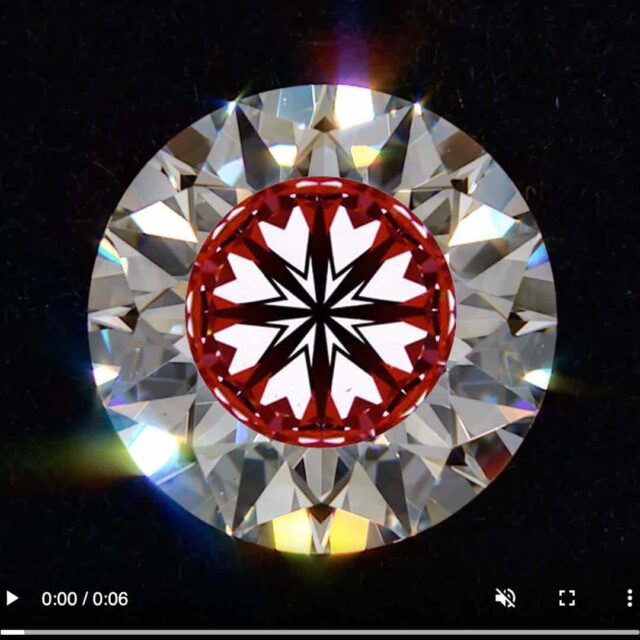 In other words, the H&A pattern is not visible from the perspective shown here. In this case, we combined the clarity and hearts images of this Black by Brian Gavin diamond to illustrate the visual properties of H&A diamonds.

Consequently, the original draft of this article was featured by Hearts on Fire in the press release Nice Ice Blog Reviews HOF. We were stoked when they republished our article on their blog because it's a nice compliment.

Our History with Hearts on Fire Diamonds: 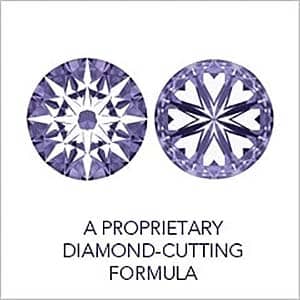 Shortly after launching Nice Ice on the Internet in February of 1996, we ran across a company called Hearts on Fire. We were attending the JCK Diamond and Jewelry trade Show in Las Vegas, Nevada.

At the time we were importing Hearts & Arrows diamonds directly from diamond cutters in Antwerp, Belgium and Ramit Gan / Tel Aviv, Israel. However, we realized that the people behind Hearts on Fire diamonds had what it took to take the marketing of Hearts and Arrows Diamonds to the next level.

We signed up to be an authorized dealer for Hearts on Fire diamonds. If I recall correctly, we were Authorized HOF dealer #18 in the United States. The image shown here is an illustration from their website.

However, that quickly changed as the popularity of Hearts on Fire Diamonds and our online presence grew. Under those circumstances, we eventually surrendered our dealership. That left us free to focus on marketing other brands of Hearts and Arrows diamonds.

Shopping for Hearts on Fire Diamonds: 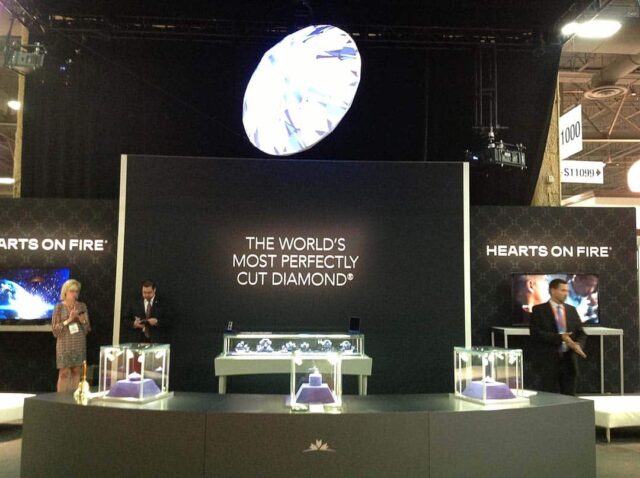 Fast forward to the 2013 JCK Trade Show. This time around, I stumble across the booth for Hearts on Fire Diamonds once again. But this time it's obvious that the magnitude of the company has grown.

Because their booth is colossal and one of the few that I felt compelled to photograph. With permission of course, because photography is not permitted within the JCK show without permission of the vendor.

During the course of conversation, my original representative from Hearts on Fire mentioned that they'd opened up their first retail location.

The Las Vegas Store is Stunning: 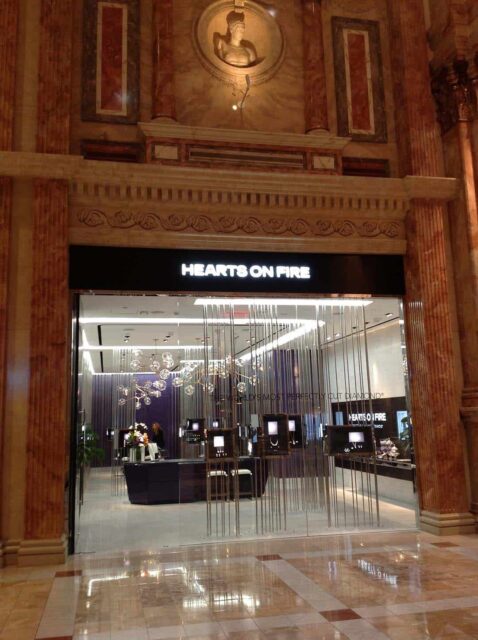 The first thing I have to say is "WOW” because the Hearts on Fire store in Las Vegas, Nevada is amazing! It definitely is not what I expected, but then again, I don't know what I expected.

However, Hearts on Fire has always been a leader in innovation. Especially when it comes to marketing Hearts and Arrows diamonds.

In the first place, this is the first jewelry store that I’ve ever seen that barely resembles a jewelry store. As a matter of fact, it is quite literally devoid of sales counters.

In other words, they've eliminated the traditional barrier that separates the customer from the sales associate. Consequently, Hearts on Fire has replaced the sales counters with really cool looking display cases.

If you look closely at the picture on the left, then you'll see that the sales cases are suspended by steel bars that extend from floor to ceiling. What I found really cool is that the cases open from the bottom out.

In that event, the bottom platform that displays the jewelry drops down and forward. When that happens, the customer is provided with comfortable access to each collection.

At the same time, the presentation is clean, brilliant, and honestly I wish I'd thought of it back when we had a retail jewelry store because it was quite disarming. The store also features a comfortable lounge in the back where customers can sit down and try on the pieces that they've selected. 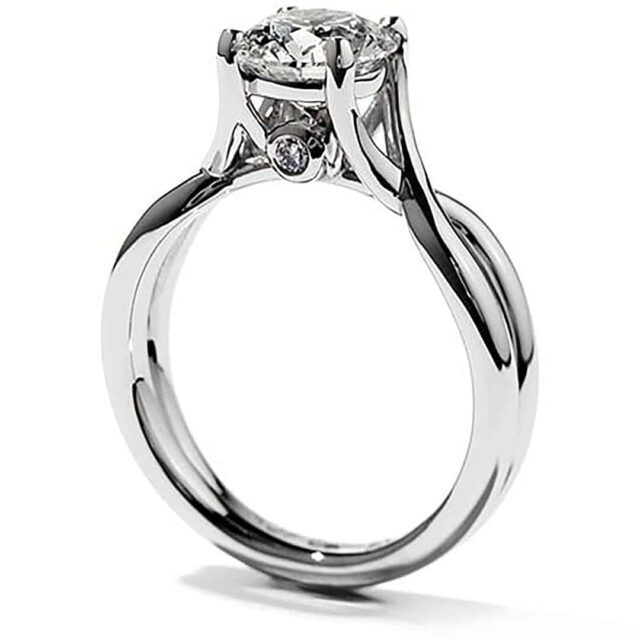 Timeless Solitaire by Hearts on Fire.

Obviously, my reason for visiting the Hearts on Fire flagship store in Las Vegas was to shop for a diamond engagement ring. In that case, I asked for something in the range of 2.50 – 3.00 carats.

They presented me with this beautiful Hearts on Fire Timeless Solitaire platinum engagement ring. The center stone was a HOF round diamond that was 3.00 carat, G-color, and VS-2 clarity. Consequently, the diamond had an overall cut grade of AGS Ideal-0.

The total depth of the diamond was 62.3% and it had a 54.6% table diameter. With a 34.7 degree crown angle that was offset by a 40.7 degree pavilion angle. As a matter of fact, that is right where it should be to produce optimum light return.

The diamond is accompanied by a certification from Hearts on Fire. As a matter of fact, the images of hearts and arrows were spot on with my expectations. That is a good thing since Hearts on Fire advertises their production as being "the world’s most perfectly cut diamond.”

As far as that slogan goes, the World’s Diamond Critic has no complaints. As a matter of fact, Hearts on Fire remains one of my favorite brands of Hearts and Arrows Diamonds. In that case, I definitely recommend that you check them out if you get a chance.

Now if you’re a regular reader of my blog, you might recall that my personal preference for the measurements and proportions of a round brilliant ideal cut diamond are as follows:

So, you might be wondering why "The World's Diamond Critic" isn't beating this Hearts on Fire diamond to death. After all, it has a 62.3% total depth and that's steeper than the range stated above.

As a matter of fact, the total depth of this particular Hearts on Fire Diamond is a bit deeper than I prefer. However, it's  not having a negative impact upon the light return or visual performance of this particular diamond. The reason is because it's due to the girdle thickness and not because of a steep crown or pavilion section.

Consequently, if you’re going to have a little extra depth in a diamond, you want it to be in the girdle section. In that case, it’s kind of a no harm, no foul type of scenario. In addition, you have to realize that if this Hearts on Fire diamond been cut to my exact specifications, then carat weight of the diamond would have dipped below the 3.00 carat mark.

As a matter of fact, the loss of value would have been substantial. Truth be told, if I’d have been the one deciding whether to cut this stone to my perfect parameters or conserve carat weight, I’d have opted to keep my job and do the exact same thing. In this case, it's pretty much the only way to create the light performance while maintaining the value of the stone.

At the time this review was originally written, that HOF diamond had a retail value of about $149.5K. So, it’s not like we’re talking about chump change here! Before you cough up a $$$ Furball $$$: Keep in mind that this puppy was most likely cut from a piece of diamond rough weighing in the range of ten carats! That’s a lot of diamond rough that was left on the cutting room floor.

All right, not all of it ended up on the floor. They might have gotten another carat out of the other section that was sawn off the top. Maybe less, maybe more, but there is a lot of diamond rough being left behind. And that is why diamond prices increase dramatically along with carat weight.

Two Thumbs Up for Hearts on Fire Diamonds:

As a matter of fact, I give Hearts on Fire Diamonds Big Two Thumbs Up. Both the consistency of their production quality and the professional nature of their sales staff.

Obviously, I found the store design to be state-of-the-art and fashionable. In addition, there was no resistance when I asked to see the lab report for the diamond. At the same time, there was no problem getting a loupe to see the inclusions.

Consequently, that was in stark comparison with the experience I had when I secret shopped Tiffany & Company. On a slightly related note, I’ve learned that Hearts on Fire will be opening another store in King of Prussia, Philadelphia. Be sure to check it out if you’re out that way.

Of course if you’re not going to be in Las Vegas, Nevada or King of Prussia, Philadelphia anytime soon, you can check out Hearts on Fire Diamonds at designated retailers throughout the United States and in 34 countries. Needless to say, that I'm happy to look over the details for any HOF Diamond that you may be considering.

Nice Ice Diamonds uses cookies to provide you with the best experience. By clicking “Accept”, you consent to the use of ALL the cookies. Disabling or refusing the use of cookies might cause some elements of the site not to function properly.
Do not sell my personal information.
Cookie SettingsAccept
Manage consent