Exploring the Canadian Diavik Diamond Mine

The Diavik Diamond Mine is in the middle of the Northwest Territories of Canada. Consequently, it is the most well-known Canadian diamond mine, owned in part by the Rio Tinto Mining Group.

The Diavik Mine stands on a 20-kilometer square island, known as East Island. A substantial quantity of Canadian diamonds originates from rough unearthed in this region.

As the crow flies, East Island is about 300 kilometers northeast of Yellowknife. That is the capital of Canada's Northwest Territories. It is also within the region known as Lac de Gras. One thing that people tend to overlook is the cost of research and development. It took a little more than 12 years of operations to realize a profit concerning the Diavik site. That's something else to think about as you ponder diamond prices. 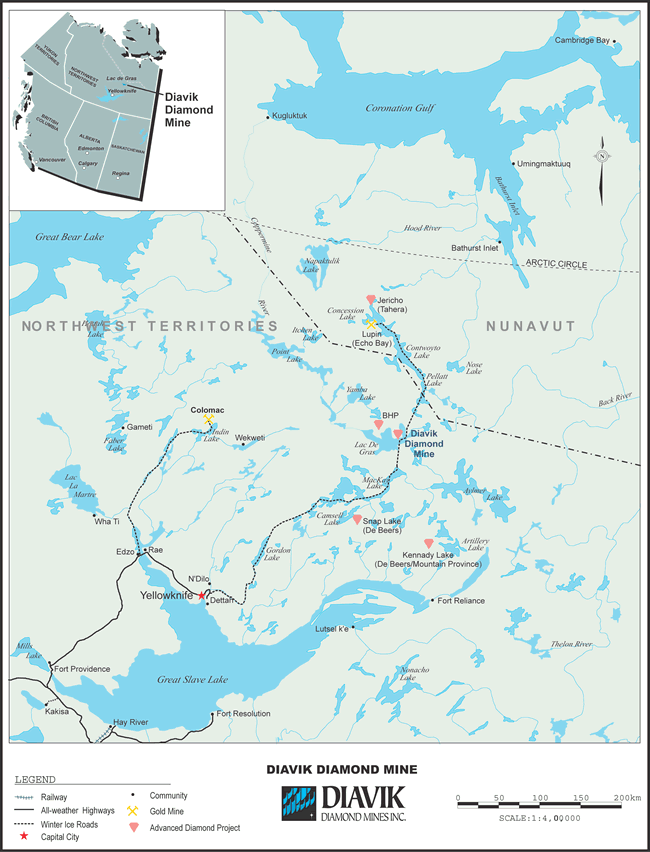 According to legend, the name Lake Ekati originates from aboriginal tribes. It stems from quartz veins found in the bedrock outcrops that resemble caribou fat.

That's just another one of those things you might need to know if you're ever on Jeopardy. In the same way, Lac de Gras is 60 kilometers long and averages 16 kilometers wide. It also has a shoreline length of 740 kilometers.

The water temperature ranges from 0°C to a brisk 18°C in the summer. The water quality resembles distilled water because low levels of nutrients result in low aquatic productivity.

There are also low-light conditions all winter and cold water temperatures and ice last eight months out of the year. Various wildlife such as trout, cisco, whitefish, arctic grayling, burbot, longnose sucker, and slimy sculpin inhabit the lake.

The water body has a drainage area of about 4,000 square kilometers. Lac du Sauvage lies to the northeast of the Coppermine River's headwaters, which flows 520 kilometers from Western Lac de Gras to the Arctic Ocean.

The Arctic Circle lies 220 kilometers north of the mine. Under those circumstances, the key to mining operations is a private ice road that various mining companies share.

The road has been in operation for about twenty years and requires annual service. Approximately 75% of the road is ice and runs over frozen lakes. And you thought that I was joking about that Ice Road Truckers reference.

Geology of the Area: 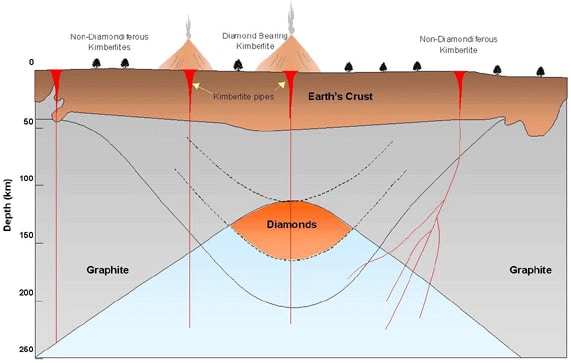 The Diavik Diamond Mine lies in Precambrian rocks of the Slave Geological Province. It is known to host gold, copper, zinc, nickel, and now diamonds.

Consequently, this ancient rock is among the world's oldest and formed about 2.7 to 2.5 billion years ago. This illustration shows how diamonds travel up kimberlite pipes to the surface.

Map of the Region: 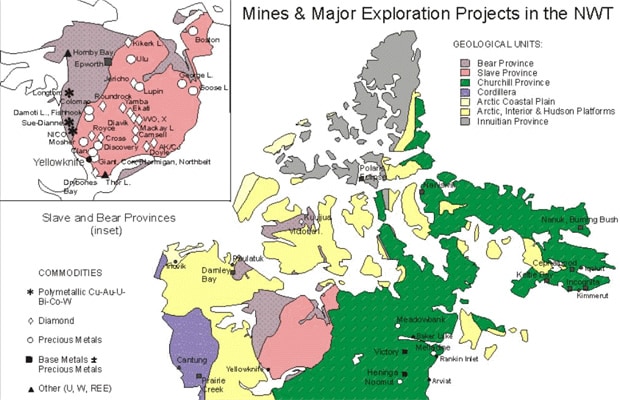 Map of the Diavik Canadian Diamond Mine

This map is courtesy of the Indian and Northern Affairs Canada. The Slave Geological Province produces much of the north's mineral wealth.

Granitic rocks predominantly underlie the area and intrude into slightly older meta-sedimentary rocks. They are initially from sandstone and shale deposits.

How Do They Explore and Look For Diamonds in Canada? 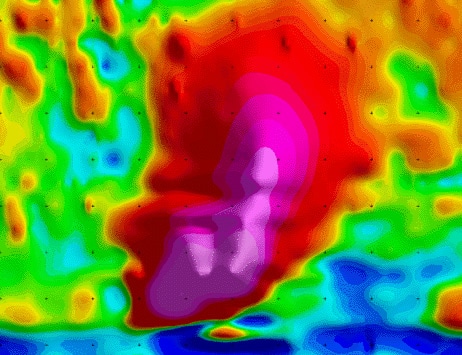 As you might imagine, it's difficult and costly to explore diamond deposits. Rather than physically search for elusive and rare diamonds, geologists seek other clues.

Geologists set up tent camps and conduct several types of surveys. They take geochemical surveys and pan soil samples, looking for indications of minerals. An abundance of garnets, for example, might indicate the presence of a kimberlite pipe.

Under those circumstances, a trail of indicator minerals can lead to the discovery of Kimber pipes. Geophysical surveys can also differentiate hidden kimberlite pipes from surrounding host rock.

Maps like the one above are computer-generated using geophysical data. If potential kimberlite targets appear, then portable diamond drills remove core samples. The results will determine if the target contains kimberlite.

They estimate 5,000 kimberlites in the world, but only 23 contain enough diamonds to warrant exploration. In other words, that is the number of Kimber deposits that justify the expense of mining operations.

When diamonds are found in sufficient quantities to suggest an orebody, a small mining operation removes a more extensive sample weighing several thousand tonnes. This sample is processed to remove the diamonds that they evaluate for quantity, quality, and size.

Canadian Diamonds Travel Up Kimber Pipes to the Earth's Surface:

The Diavik kimberlite pipes are volcanic cores injected much older, granitic, and meta-sedimentary rocks a mere 55 million years ago. Kimberlite is a rare rock type commonly found in carrot-shaped pipes.

This drawing of a carrot-shaped kimberlite pipe represents the roots of ancient, small volcanoes. The kimberlite originates from over 150 km below the earth's surface. That is where diamonds commonly form before the Kimber pipe brings them to the surface.

Globally, kimberlite pipes average 12 hectares in surface area and reach depths of several hundred meters. The Kimber pipes in the Diavik Diamond Mine range in surface area from 0.9 to 1.6 hectares and extend below 400 meters.

Relatively fresh, often charred – but not petrified – wood found only in China today has been encountered in drill core at depths up to 400 meters. As a result of the warmer prehistoric climate, the coniferous trees fell and incorporated into the pipes.

The Region Around the Diavik Diamond Mine:

The rolling tundra surrounds the Diavik Diamond Mine. The region was initially named the "Barren Lands" by early explorers due to its lack of trees. The area includes numerous lakes, bedrock outcrops, and glacial deposits of boulders, till, and eskers.

There is little known soil of cryosolic order because it forms where permafrost occurs within 1-2 meters of the surface. Characteristics include layers that disrupt, mix, or break during the freeze-thaw activity.

Vegetation Around the Diavik Diamond Mine:

Wildlife Species Near the Diavik Diamond Mine:

Mammal species that inhabit the region include grizzly bears, wolves, foxes, arctic hare, ground squirrels, and wolverines. In spring and fall, portions of the Bathurst caribou herd migrate through the region. Eighty-four bird species and 16 mammal species are summer visitors or permanent residents.

Nice Ice Diamonds uses cookies to provide you with the best experience. By clicking “Accept”, you consent to the use of ALL the cookies. Disabling or refusing the use of cookies might cause some elements of the site not to function properly.
Do not sell my personal information.
Cookie SettingsAccept
Manage consent