A Brilliant Formula
For Sparkle Factor

Get It Free Now

How to Judge Diamond Light Performance

The Age of Diamond or How Old Is Your Diamond

Have you ever wondered about James Allen Inclusions and diamond cut quality? According to Google Analytics, quite a few people search for "are there lots of inclusions in James Allen diamonds?"

Consequently, it's one of the more popular search terms that land people on this site. In that case, it seems like a topic that is worthy of its own post.

After all, if one person is trying to determine whether James Allen Diamonds have lots of inclusions, then other people are probably wondering the same thing.

Spoiler Alert: Why would James Allen Diamonds be any more or less included than certified diamonds from any other vendor? 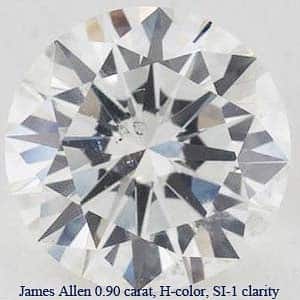 Perhaps the person searching saw the 3D clarity image for a diamond similar to this 0.90 carat, H-color, SI-1 clarity, round brilliant cut diamond from James Allen.

Then, found themselves thinking “Whoa! It’s really easy to see the inclusions in that SI-1 clarity diamond!” Consequently, a lot of people overlook the fact that images like this show diamonds various degrees of magnification.

Specifically, this clarity photograph shows the inclusions at 35x magnification. In contrast, the industry standard for diamond grading is only 10x.

Under those circumstances, this diamond probably seems closer to a tennis ball on your monitor. However, the actual diameter is slightly smaller than the eraser on a #2 pencil.

Could This SI1 Clarity Diamond Be Eye-clean? 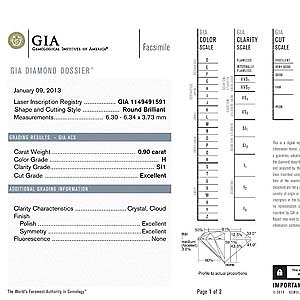 Since most of those inclusions appear to be translucent, I think that most people will have difficulty seeing them without magnification.

However, the clarity photograph is helpful because otherwise, you wouldn’t have any idea what the inclusions actually look like. Nor would you be aware of the black obstruction under the table facet.

First, because this 0.90 carat, H-color, SI-1 clarity, round brilliant cut diamond from James Allen only comes with a GIA Diamond Dossier. That report format does not feature a plotting diagram of the inclusions.

Rather, the GIA lists the types of inclusions present within the diamond under the heading clarity characteristics. In that case, there is no indication of where the inclusions are located.

In that case, you’d be buying this diamond “in the dark” without the clarity photograph provided. Of course, the same is true of diamond grading reports that feature a plotting diagram, because those maps only show the relative location of inclusions from one perspective. 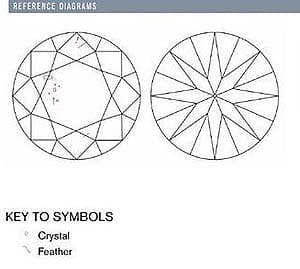 The diamond grading report for this 1.01 carat, H-color, SI-1 clarity diamond from James Allen features a plotting diagram that shows the inclusions.

According to the GIA, there are a few small diamond crystals and some tiny feathers. In the absence of a detailed clarity photograph, the appearance of the inclusions is left up to our imagination.

In the event that the diamond looks eye-clean when the customer looks at it, they probably won’t give the inclusions a second thought. Out of sight, out of mind, as people like to say. 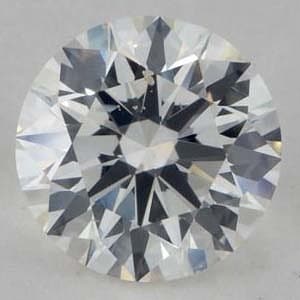 Many jewelry stores seem happy to allow people to buy blindly with little more than the plotting diagram on the lab report. However, James Allen prefers to confuse the issue by providing us with a high-resolution video of the inclusions.

One might wonder what they are thinking because showing the inclusions at 35x magnification makes them seem larger than life. Because that might lead us to wonder whether we might be able to see them with just our eyes?

Perhaps this is where questions like “are there a lot of inclusions in James Allen diamonds” come from. Okay, that might be a bit sarcastic.

Putting Things Back Into Perspective:

In the real world, the inclusions within this diamond are probably pretty difficult to see. In fact, most people may have difficulty seeing the inclusions in SI1 clarity diamonds without magnification. Especially if the diamonds are graded by first-tier labs, such as the AGS or GIA.

First, it’s essential to remember that this 1-carat diamond has an average outside diameter of 6.4 millimeters. Just imagine how tiny those inclusions might look on your screen if this photograph was shown on to the scale of actual size.

In that case, the diameter of this diamond is smaller than the eraser on a standard #2 pencil. Under those circumstances, it seems fair to assume that the James Allen inclusions shown here are of no consequence.

At least, no more, or less, than the GIA and AGS graded diamonds sold by other vendors. In this case, the only difference might be the size of the clarity photographs and how that makes the inclusions easier to locate.