Degrees of Magnification for Diamond Grading 10x and Higher

To begin with, the 10X diamond grading loupe on the left is the industry standard for magnification. In other words, this is the instrument used most often by professionals for diamond clarity grading.

In that case, they're not likely to see the inclusions within the diamonds they are considering. Be that as it may, there are many jewelry stores that only provide their clients with 5-7x power loupes at the front counter.

Such tactics are intended to make it even more difficult for you to see the inclusions. In that event, you might mistakingly think that the diamond is of higher clarity.

For that reason, we use the GIA Gem Scope pictured below because it is a more precise instrument. In that case, we're able to examine diamonds using higher degrees of magnification. Such as 10x, 15x, 20x, 30x, 40x, 50x, 60x, and 70x magnification for which we will provide examples below.

For our purposes, we kept one in the back for diamond grading and one out front on the sales counter for our customers. Obviously it's much easier for you to see inclusions using the magnification of a microscope.

Microscopes are easier to use for diamond grading for several reasons. Not the least of which is that the diamond is held in place with a pair of diamond tweezers. As a matter of fact, the tweezers are part of the stationary unit.

In that case, it is easier to focus on the inclusions without having to adjust for focal depth using a handheld loupe. At the same time, you don't have to worry about the diamond flying across the room if you squeeze the tweezers too tight.

This particular GIA Gem Scope has a range of magnification between 10x and 70x. Interestingly enough we attended a Health Fair a few years ago and the same set up was being used by a vitamin company to demonstrate how their product entered the blood stream. It was pretty cool to watch our blood cells moving around under 70x magnification on a glass slide. 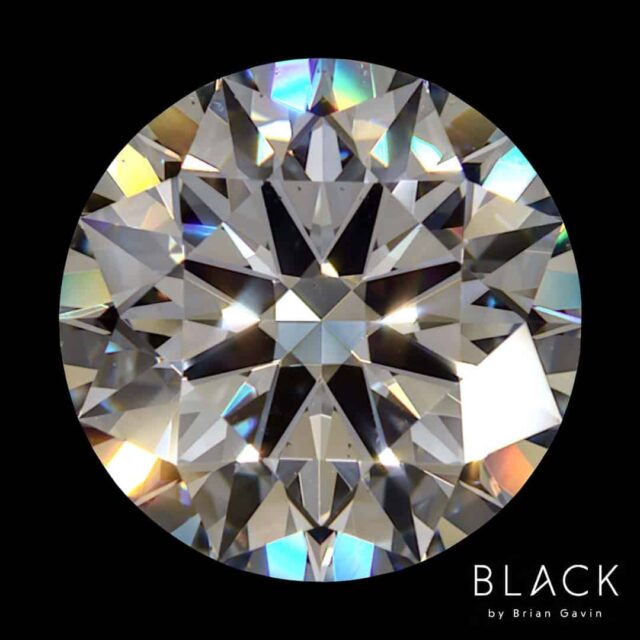 "Fire" of a Black by Brian Gavin Diamond.

In the first place, we need that the imaging system used by Brian Gavin is much higher quality than normal. As a matter of fact, it takes super high-resolution images that go way beyond lab-quality.

In addition, they publish the full size images, so that you can view them full screen on your computer. Under those circumstances, it will be much easier for you to see the inclusions within Brian Gavin Diamonds.

Obviously, that means that you have to account for differences in image quality and size. Otherwise, you might make the mistake of thinking that the inclusions are more apparent.

When the reality is that the image quality is simply much better than you're probably used to seeing. After all, the diamond on the left looks amazing, doesn't it?

Given that everything is always a matter of perspective, we photographed this dime using Brian Gavin's imaging system. A standard US Dime has an outside diameter of 17.9 mm.

Whereas a 1-carat round ideal cut diamond has an average outside diameter around 6.5 mm. As a matter of fact, that is about the same size as the eraser on a standard #2 pencil.

Obviously, the ultra-high definition resolution images that Brian Gavin provides make it much easier to see the inclusions. After all, just look at how easy it is to see all the little scratches that appear on the surface of this dime. At the same time, take note of how large the diameter of the dime seems to be in this photograph.

As stated previously, the industry standard for diamond clarity grading is 10x magnification. Although that may be true, higher degrees of magnification make it easier to identify certain types of inclusions.

Here are some photographs of a standard 17.9mm US Dime as seen through our GIA Gem Scope. The images below show the dime as seen under 10x, 20x, 40x, and 60x magnification. Take a dime out of your pocket and hold it up to the screen in order to maintain perspective.

In case you're wondering about how other things look at various degrees of magnification, let's examine the pencil on your desk. Go ahead and pick it up, then hold it up to the screen for the sake of comparison.

By the way, the pink eraser on a standard #2 yellow pencil measures 6.5 mm in diameter. As a matter of fact, that is about the same size as the average diameter of a 1-carat round ideal cut diamond. It's important to keep this kind of thing in mind when evaluating inclusions using the diamond clarity photographs provided.

Tip of a Pencil @10x Magnification.

The picture on the left shows the sharpened tip of a standard #2 pencil as seen under 10x magnification. That is the industry standard for diamond clarity grading. Needless to say that those inclusions that might seem so big on your monitor are extremely minute.

Now, that you've had an opportunity to calibrate your perception, let's look at a diamond under varying degrees of magnification. For this purpose, we'll be be using some file photographs of a 0.811 carat, D-color, VS-2 clarity, ideal cut diamond.

In this case, the diamond measures 6.10 - 6.15 x 3.66 mm. That means that it has an average outside diameter of 6.125 mm which is smaller than the eraser pictured above. The primary inclusions are two small feathers that appear in the lower pavilion section.

The inclusions are not visible to us without magnification because this is a VS-2 clarity diamond. However, the feathers are readily and immediately visible using magnification. At least from this vantage point where we're highlighting the location for you. As a matter of fact, it took us a few minutes to find the inclusions to begin with.

Let's take a moment to think about this for the purpose of maintaining perspective when grading diamond clarity. As stated previously, the diamond above has an average diameter smaller than a pencil eraser. And yet, the primary inclusions are readily and immediately visible using standard 10x magnification.

Or, at least it might seem that way when we've taken the time to point the inclusions out to you. Because we practically burned our eyes out trying to find those feathers with a 10x diamond grading loupe.

Suffice to say that it was much easier to find the inclusions using the controlled elements of our GIA Gem Scope. As a matter of fact, the same premise holds true for the high-resolution images that Brian Gavin provides.

We asked Brian Gavin to take the picture on the left in order to demonstrate the difference between perception and reality. The diamond held in the tweezers is this 0.828 carat, F-color, VS-1 clarity, Black by Brian Gavin diamond.  As a matter of fact, it it has an average outside diameter of 6.11 millimeters.

But, it looks freaking HUGE in the ultra-high-resolution video! Especially if you click on the magnifying glass icon in the lower right corner that will make it full screen.

How Big Are The Inclusions?

At some point in the conversation, you're likely to ask: "So, how big are the inclusions?" And that my friend, is how we ended up taking the picture of the ant that you see on the left.

Because our response with regards to the feathers in the VS-2 clarity eighty-pointer above was: "About the size of the hair on a gnat's ass." To which the client responded by asking: "How big is that?"

Obviously, we couldn't find a gnat, but here shows the hair on an ant's ass at 20x. And with that, we rest our case. Our Concierge Service is happy to answer any questions.