Twinning Wisps Inclusions, the Good, the Bad, and the Ugly

If the clarity characteristic "Twinning Wisps" appears on a diamond grading report, it indicates included inter-growth within the diamond crystal structure.

In that case, portions of the diamond crystal twist together to create a twinning plane. Consequently, the effect of inter-growth somewhat resembles cotton candy under 10x magnification.

Diamond crystals within the inter-growth may appear light or dark, as shown in this Blue Nile diamond. Consequently, this photograph shows the diamond under 35x magnification.

How Do Twinning Wisps Look? 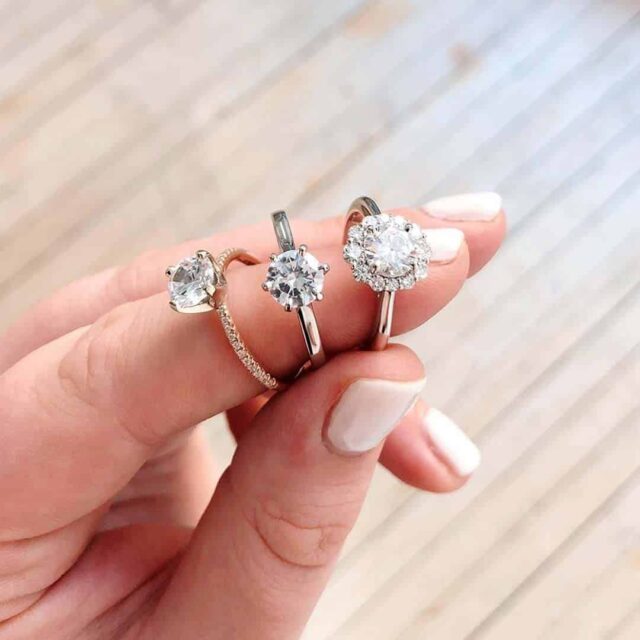 At higher degrees of magnification, twinning wisps often look like white or black stripes. Twinning wisps might also look like streaks of cotton candy running throughout the diamond.

This type of inclusion is not necessarily good or bad. However, twinning wisps can make a diamond look cloudy if the concentration of the inclusions is dense.

With this in mind, I suggest carefully evaluating diamonds that contain these twisted crystal planes to determine whether they affect visual performance.

Of course, the inclusions are more apparent at 35x magnification in the photograph above than they'll seem in a ring. 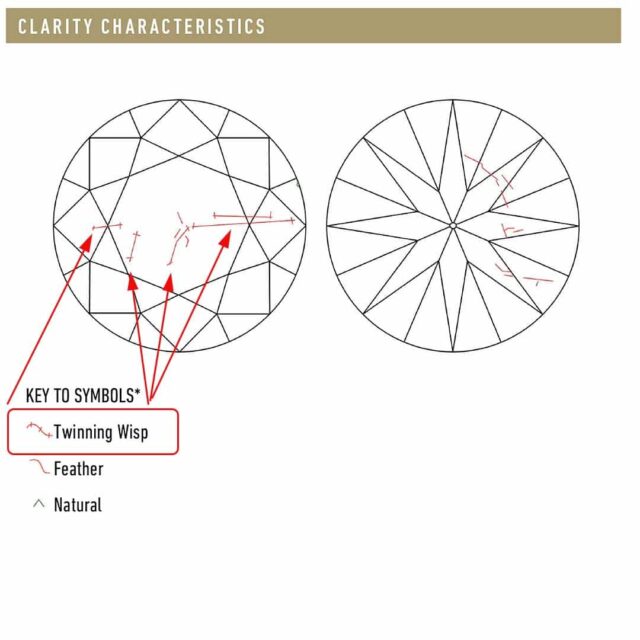 Knowing whether a diamond contains twinning wisps is as easy as looking at the plotting diagram and key to symbols. Twinning wisp inclusions

This plotting diagram indicates the location of the twinning wisps inclusions using red squiggly lines. In this case, they extend outward from the center of the table facet towards the diamond's girdle edge.

The extent of the inter-growth is readily apparent in the clarity photograph above. Consequently, the diamond appears to be more heavily included than the plotting diagram implies.

In that case, the lab did not plot the full extent of the inclusions. However, the comment "additional twinning wisps are not shown" indicates their presence. 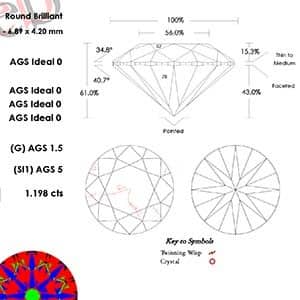 They say that a picture is worth a thousand words. So, focus on the plotting diagram for this James Allen True Hearts diamond.

They also extend outwards towards the edges in the relative five and nine o'clock positions. Inter-growth is also visible within the crown facets, as shown on the plotting diagram.

There are also twinning wisps under the upper girdle facet in the two o'clock position. And under the kite-shaped bezel facet in the four o'clock region.

The Extent of Inter-growth Varies: 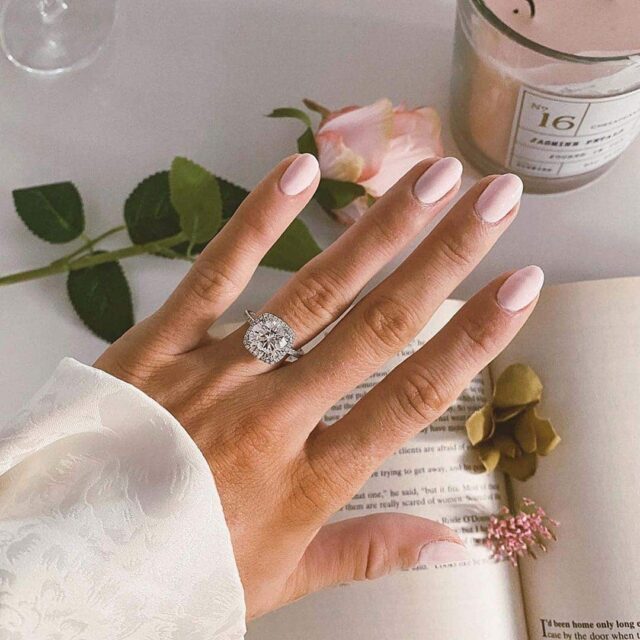 That might lead you to believe that this James Allen True Hearts diamond is heavily laden with twinning wisps. That is an accurate assessment from one perspective.

However, the question is whether that inter-growth is having an impact. The clarity characteristics are more evident, as shown here under 35X magnification.

However, your bride will be looking at the diamond set in a ring on her hand. Such as this cushion halo setting from James Allen, and the inclusions won't be as visible at arm's length.

Knowing what twinning wisps look like will make it easier for you to see them. Here is a screenshot of the James Allen True Hearts diamond. The red arrows which I added to the image on the right identify the inter-growth within this diamond: 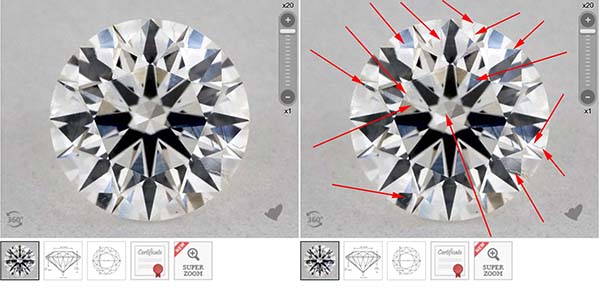 In this case, the twinning wisps are rather ghost-like and not easy to see. In contrast, the inter-growth within other diamonds might be more visible.

Especially if the diamond crystals trapped within the twisted crystal planes are darker in color. Remember that inclusions within diamonds can be light or dark in color and tone.

Consequently, inclusions such as diamond crystals and twinning wisps often appear dark in clarity photographs. However, they might appear light or translucent when viewed through a 10x diamond grading loupe.

Are Twinning Wisps Light or Dark? 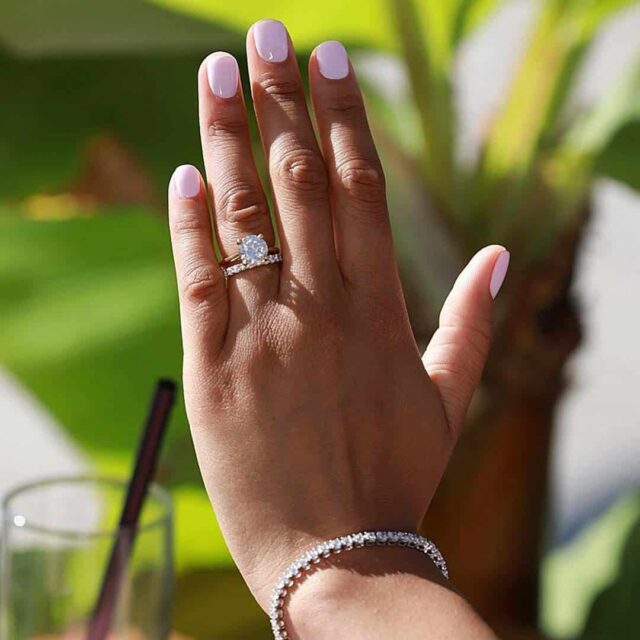 Consequently, back-lighting the diamond makes locating and identifying inclusions for grading purposes easier. However, it is similar to photographing somebody with the sun setting behind them.

Under those circumstances, the subject will appear dark unless the photographer uses a flash to illuminate their features. The same technique cannot be used with diamonds because it would produce sparkle.

In that case, it can be challenging to determine whether inclusions are light or dark. However, the dealer can loupe the diamond if it's in their physical possession.

Should I Buy a Diamond with Twinning Wisps? 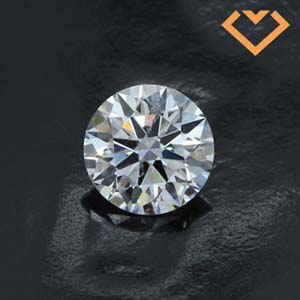 Notice how minimal the twinning wisps appear in the 35x magnification clarity photograph. In that case, they'll be challenging to see at 10x and practically impossible with the naked eye.

Click on the link above to see the diamond grading report. Then, you will see that the inclusions are not extensive on the plotting diagram either. 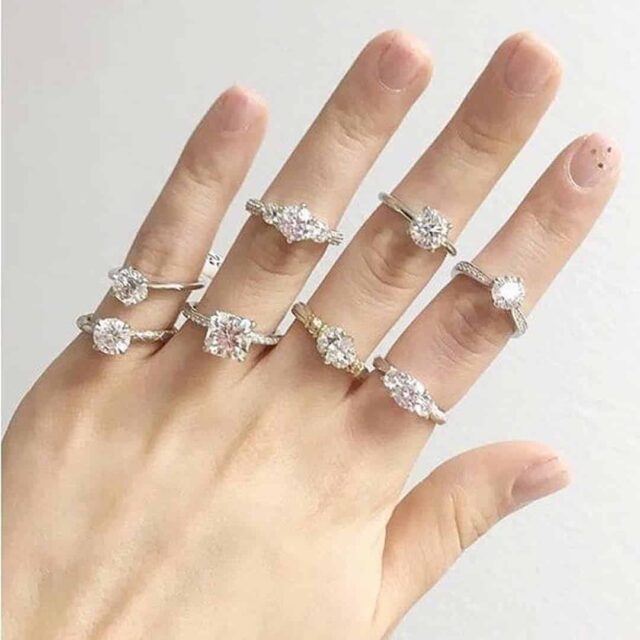 The SI-1 clarity diamond above is at the higher end of the spectrum. Thus, it's a great example of a diamond with twinning wisps that I might buy myself.

Keep in mind that each diamond clarity grade represents a range or spectrum of inclusion. That means that some SI-1 clarity diamonds will look better or worse than others.

Other SI-1 clarity diamonds will be in the middle of the range and be textbook examples. The same principle applies to twinning wisps, and some will be more extensive and visible than others. 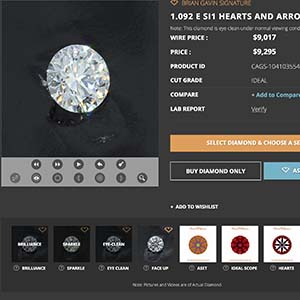 Take the video for this Brian Gavin Signature diamond for a spin. Click your mouse's left button over the video frame. Then, hold it down while you drag the diamond left or right.

Twinning wisps within diamonds vary from stone to stone. Thus, the visibility differs depending on the depth and location within the diamond.

Therefore, it's helpful to have a video to examine the extent of the inclusions facet-to-facet. I also like looking at a diamond with twinning wisps under different light sources. 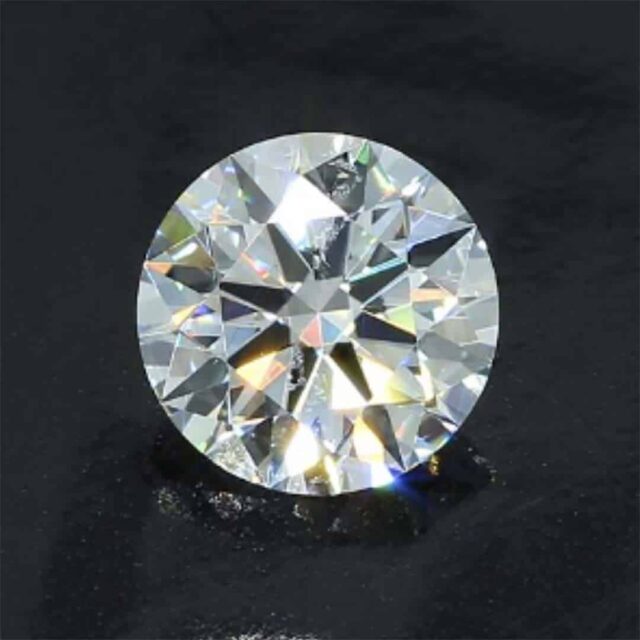 One of the reasons I like Brian Gavin Diamonds is that they provide videos under several different lighting types.

The sparkle video is my favorite because it shows how the diamond dances and sparkles under brighter lighting. However, the speckled platform reflects up into the diamond and makes it seem more included.

In reality, you're only seeing reflections of the platform reflecting throughout the diamond. The diamond's sparkle factor is so spectacular; it reflects everything around it, including the speckled platform beneath it.

Should You Accept Twinning Wisp Inclusions? 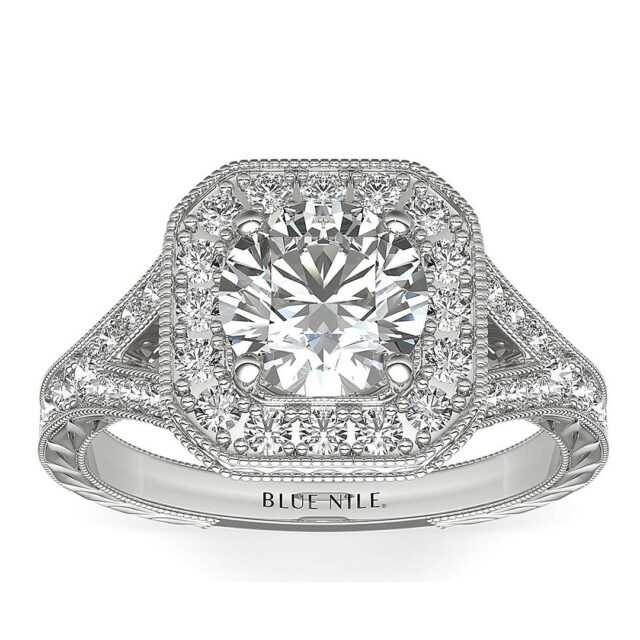 In that case, I might accept the diamond because twinning wisps have no impact. Under the right circumstances, such inter-growth can be challenging to see without magnification.

For example, the twinning wisps within the SI1 clarity diamond above are smaller and of no consequence. Read this tutorial on Diamond Clarity Characteristics to learn more about diamond inclusions.

Let Us Evaluate the Inclusions: Take advantage of our free Diamond Concierge Service if you want help finding the diamond of your dreams!

The service costs you nothing. We may receive a small commission when you use the affiliate links provided. However, that does not change your purchase price.

We're happy to assist whether you purchase from one of my preferred vendors, another online vendor, or your local brick-and-mortar jeweler. It's a concept I learned from the great Zig Ziglar.