in Fun with Diamonds

People frequently ask me whether diamonds from the Brian Gavin Blue fluorescent collection look blue. Most of them say something like “I like what you had to say about that 1.328 carat from Brian Gavin. However, my girlfriend says that she doesn’t want a blue diamond.”

Brian Gavin Blue Fluorescent diamonds are “white diamonds” that exhibit blue fluorescence when exposed to black light. However, under normal lighting circumstances, they look perfectly normal. As a matter of fact, it’s kind of like a cool secret superpower! As in “Wonder Twin Powers Activate!” and all that. 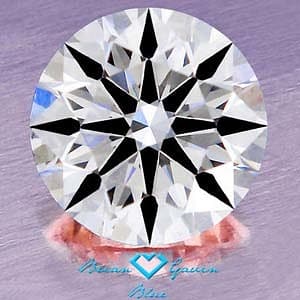 It’s a common misconception that blue fluorescent diamonds look blue all the time. However, the reality is that they only glow neon blue when they are exposed to black light. The photograph pictured above was taken of this 1.328 carat, H-color, VS-2 clarity, diamond from the Brian Gavin Blue collection.

As seen under black light in a pitch-black room. But under normal lighting, the diamond looks just like it appears here in the picture to the left. For the most part, blue fluorescence in a diamond is considered to be nothing more than “an identifying characteristic” by the gemological community.

There is no measurable difference in light return or visual performance (brilliance, dispersion, scintillation).  In fact, both diamonds have an overall cut grade of AGS Ideal-0 as graded on the Platinum Light Performance grading platform of the American Gem Society Laboratory (AGSL) and they were produced by the same diamond cutters, on the same production line… So what gives?

Why Is There a Discount for Brian Gavin Blue Fluorescent Diamonds?

Quite simply, back in the last century, an investment firm in Asia began selling parcels of diamonds for investment purposes, and they decided to set themselves apart from other firms doing the same thing, by stating that their diamond investment parcels did not contain any diamonds with blue fluorescence.

This is not surprising because, in parts of Asia, a superstition exists which is based upon fluorescence in diamonds being caused by the presence of ancient spirits that are trapped within the diamonds. In other words, some cultures believe that diamonds are haunted.  The nature of this belief had such a strong effect on the diamond market in Asia. In addition to that there was actually a point where DeBeers backed a diamond exchange program in Asia to replace diamonds with fluorescence for diamonds without fluorescence in order to maintain the validity of the market.

So perhaps if you or your fiancé happen to be Asian, fluorescence might be a valid concern, because depending on their belief system, your grandparents might run out of the room in a panic, if you happen to show them your diamond under black light, because they might believe that it is haunted.

Beyond that, I don’t see a reason to be concerned about blue fluorescence within a diamond.  You will also want to make sure that the carat weight of the diamond does not contain the number four, because it signifies death… And you won’t want to present the diamond engagement ring in a black box for the same reason.

The Desirability of Blue-White Diamonds:

Interestingly enough, the demand for blue fluorescent diamonds was so high in the United States during the mid-1900s that the supply ran low and a premium was charged on diamonds that exhibited medium blue, strong blue, or very strong blue fluorescence.  And some retail jewelers began to use blue colored light bulbs in their display cases to make diamonds appear blue, even when they did not exhibit fluorescence.

The problem was so widespread and the abuses so rampant, that the Federal Trade Commission’s Trade Practice Rules for the Jewelry Industry addressee the issue by creating: Rule 28 Misuse of the term “Blue-White”:

It is an unfair trade practice to use the term “blue-white,” or any other term, expression, or representation of similar import, as descriptive of any diamond which under normal, north daylight or its equivalent, shows any color or any trace of any color other than blue or bluish.”

Generally speaking, the term “blue-white diamond” could legally be used to describe a D-color or even an E-color diamond which exhibits very strong to distinct blue fluorescence, when examined in direct sunlight, or which exhibits a bluish-tint as would be caused by the presence of extremely strong blue fluorescence.  Rather than get into a debate over semantics, most jewelers simply eliminated the term from their vocabulary.

The reality is that some diamonds with a presence of strong to very strong blue fluorescence, will look a little bluish when exposed to strong ultra-violet light, and personally I think it’s a rather cool effect. To the extent that the 2.25 carat, I-color, SI-1 clarity, round brilliant ideal cut diamond which I wore in my wedding ring, exhibited strong blue fluorescence and looked a little lavender-blue from a side profile when it was examined in direct sunlight.

As a matter of fact, it looked perfectly normal all the rest of the time, and you kind of had to know what you were looking for in order to even notice that there was a slight lavender-blue hue in direct sunlight.  Usually, this meant that in order to see it and understand what it is, you’d have to be standing out on the sidewalk with me in front of our jewelry store. While I was pointing at the ring and saying “do you see that slight lavender-blue hue? That’s caused by the strong blue fluorescence in this diamond”. As a result, a lot of people bought blue fluorescent diamonds from us because they got to see how cool it is.

What are the Negative Effects of Blue Fluorescence in Diamonds?

According to the Gemological Institute of America, there can be a negative impact on the appearance of a diamond in fewer than 2% of gem-quality diamonds.  This means that in 98% of the cases, the fluorescence within gem-quality diamonds (those used in jewelry-related applications) are not being affected in a  negative manner by the presence of fluorescence.

Now while diamond dealers like Brian Gavin eliminate the potential of this being an issue, by personally hand-selecting every diamond for their inventory, the reality is that a lot of online dealers never actually see the diamonds which they sell… so for this reason, I tend to steer clients away from diamonds with very strong to distinct blue fluorescence when they are being sold by virtual diamond dealers.

But when it comes to diamonds from the Brian Gavin Blue Fluorescent collection I’m not concerned about the effect of the fluorescence upon the diamond. Because I know that Brian has looked at each diamond in a variety of lighting scenarios to ensure that the fluorescence is having a positive impact because he is keenly interested in maintaining the integrity of his brand.

By the way, cushion cut diamonds and princess cut diamonds are also available with blue fluorescence as part of the Brian Gavin Blue collection. Feel free to Contact Me if you have questions or would like help finding a diamond.