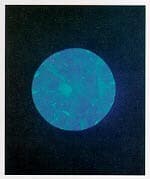 Might not be what you want to hear when you present your engagement ring to your fiancé over dinner in a dark restaurant with fancy lighting, or walking through a neighborhood aquarium, or poster shop. Nevertheless, the phenomenon of “fluorescence” in a diamond can be a pretty cool thing if you understand what it is.

Approximately one third of gem quality diamonds are luminescent and luminesce when exposed to UV light. In most cases, the luminescence will stop when the UV light source is removed; this phenomenon is known as fluorescence. Diamonds fluoresce in both long and short wave UV light, however they tend to fluoresce more intensely when subjected to long wave UV light.

Fluorescence in diamonds merely the result of boron molecules being excited by ultraviolet light which transfers energy to the molecules so that they fluoresce white, blue, green, yellow, and red. The same concept is used in light sticks, but we think the effect is way cooler in diamonds because it is the result of a naturally occurring phenomenon.  Diamond dealer Brian Gavin is so passionate about blue fluorescent diamonds that he actually highlights a hand selected collection of diamonds with blue fluorescence on his web site which he fondly refers to as Brian Gavin Blue.

Fluorescence is a property which can actually enhance the beauty of many diamonds, especially those with warmer body colors. According to the Gemological Institute of America approximately 50% of gem diamonds fluoresce enough for it to be seen under special lighting conditions, such as exposure to ultra violet (UV) light. Fewer than 10% of all gem quality diamonds fluoresce strongly enough to make a noticeable difference between the diamonds color when viewed under incandescent light (low in ultraviolet) and in sunlight or fluorescent light (high in ultraviolet).

Strong blue fluorescence in a diamond of D – H color might cause the diamond to appear foggy or oily, but such cases are extremely rare. In fact, it is estimated that fewer than 2% of all the diamonds in the market have levels of fluorescence high enough to detract from the brilliance of the stone. The owner of such a diamond may experience frustration or despair in trying to keep the diamond clean looking. However, this is not always the case, most of the time strong blue fluorescence does not affect the diamond in a negative manner and quite often it will enhance the appearance of a diamond. Fluorescence is a factor which must be evaluated diamond by diamond on an individual basis. It’s a Mother Nature thing… She can fool us, but remember, it’s not nice to fool Mother Nature. It is important to be aware of fluorescence and then to view the diamond to determine whether it’s effect on the diamond is negative, positive, or not at all.

A faint yellow diamond with strong blue fluorescence often appears to be near colorless or white. We have seen diamonds graded as Q in color (very light yellow) that appeared to be white or bluish in daylight because they had strong blue fluorescence. Such diamonds are sometimes referred to as “premier diamonds” however keep in mind that a “label” is only as trustworthy as the person using it, so buyer beware.

It seems that many people who are buying a diamond online tend to shy away from diamonds with any fluorescence because it is a factor which they cannot judge off of the online listing. However many of the people who we met with in-person when we had our jewelry store purchased diamonds with fluorescence after being able to see that the fluorescence did not have a negative impact upon the diamond. The fact of the matter is that fluorescence looks pretty cool under black light and can be a unique factor that sets your diamond apart from the masses. Many professionals within the diamond industry and independent GIA Graduate Gemologists we know wear diamonds that exhibit blue fluorescence of various degrees, the odds are that we wouldn’t buy fluorescent diamonds for ourselves if it was a negative factor.

Many of the diamonds that people purchased in our store exhibited medium to strong blue fluorescence. While some people are slightly uncomfortable with the concept of fluorescence when they first hear of it, many people find it quite attractive when they actually see it in person. People often told us during their appointment at our store that they did not want fluorescence in their diamond, but then they would buy a fluorescent diamond after seeing the phenomena for themselves during the color grading portion of our presentation.

Fluorescent diamonds are nothing new. In fact, in the old days diamond dealers used the term “blue-white” to refer to colorless (D,E,F) diamonds with strong blue fluorescence. The term actually became sort of a status symbol amongst the public and to this day people will occasionally ask for a blue-white diamond. Rule 28 of the Federal Trade Commission’s Trade Practice Rules for the Jewelry Industry addresses this issue:

It is an unfair trade practice to use the term “blue-white,” or any other term, expression, or representation of similar import, as descriptive of any diamond which under normal, north daylight or its equivalent, shows any color or any trace of any color other than blue or bluish.”

In other words, only a diamond with blue fluorescence can be represented as blue-white. However, smart jewelers have banned the term from their working vocabularies.

There can be advantages to purchasing a yellowish diamond with strong blue fluorescence. It can enable a price conscious consumer to purchase a larger “whiter looking” diamond without incurring the expense of buying a colorless or near colorless gem. Prices for diamonds with fluorescence are generally lower than would be for a diamond of comparable quality that does not have fluorescence.

As you might imagine, fluorescence can be a jeweler’s best friend or worst nightmare. When considering a diamond, ask to view the diamond under ultra violet light. The GIA DiamondLite is equipped with an ultra violet light source and most reputable jewelry stores have one on the premises although it is usually back in their diamond grading room. If the diamond picks up a light neon blue cast under the ultra violet light, it probably has faint fluorescence that will have little effect on the diamonds appearance or color grade. If it displays a strong neon blue color, it has strong blue fluorescence which will most likely effect its color and may cause the diamond to appear oily or foggy. Once again, the keyword here is “may” as in not always, might possibly, take a look and see.

On reputable diamond grading reports, such as those issued by the GIA, AGS, HRD, etc. fluorescence is listed under color or comments. Descriptions of intensity include: none / inert / negligible (all used to describe diamonds with little or no active properties); faint; slight; medium; or strong. Although blue is the most common color of fluorescence, greenish blue, green, yellow, white, pink, and red are also possible.

It is important to note that each laboratory grades fluorescence based on a range of intensity which usually goes from None / Inert / Negligible; to Faint, Medium, Strong and Distinct. The terms None / Inert / Negligible as used by the GIA and AGS laboratories (the laboratories we prefer) refer to a level of fluorescence that can range from None as defined in the Webster’s Dictionary to Extremely Faint, but not enough to warrant a rating of Faint. So don’t make the mistake of thinking that None is None / Absolutely None. A diamond rated as having a fluorescence rating of None by the GIA or Inert / Negligible by the AGS may exhibit a little fluorescence, but not enough to have any effect on the diamond in terms of visual performance.

Share
Pin
Tweet
0 Shares
0 Shares
Share
Pin
Tweet
We use cookies to personalize content and ads, to provide social media features and to analyze our traffic. We also share information about your use of our site with our social media, advertising and analytics partners who may combine it with other information that you’ve provided to them or that they’ve collected from your use of their services. For more information, please see our privacy policy. You can manage or block cookies within the settings of your browser.I UnderstandNo