How to Create the Look of Emily Ratajkowski Engagement Ring

This post intends to show how to create the look of the Emily Ratajkowski engagement ring on a budget while focusing on the sparkle factor and performance.

Model Emily Ratajkowski and Producer/Director Sebastian Bear-McClard surprised their fans by getting married in February via a surprise ceremony in a New York courthouse.

The gossip rags claim that the couple had only been dating a few weeks, which must have been the talk of the town. But what made things even more interesting was that nobody could get a peek at the ring.

Imagine those poor paparazzi all scurrying around trying to get a ring shot. Consequently, the newlyweds shocked social media fans (and perhaps their family) by announcing their marriage after the fact.

Hey, there’s something to be said for a whirlwind romance and doing things on the fly. Congratulations and best wishes to the happy couple who share their ring below.

Guys. Emily has something to tell you about how you should propose.

Rule #1: Have the ring in hand when you do it… That was Sebastian’s first mistake when he proposed to Emily at Minetta Tavern, but he didn’t have a ring, so she said no.

You’ll never guess what Sebastian did next.

I’ve got to admit, this is a smooth move.

Sebastian took the paperclip off the dinner bill and made Emily a ring on the spot.

Which she thought was “quite romantic.”

Which just goes to show that there’s more than one way to put a ring on it if you’re able to think outside the box.

Here’s the video with all the details, including how they made their own gold wedding bands the night before the wedding:

You have to admit that’s pretty cool.

And yet at the same time, from a jewelers point of view…

Yea, that wedding ring looks like a do-it-yourself project.

No offense. That’s also what makes it kind of cool…

But I have to admit that I like things a bit more uniform and polished looking. 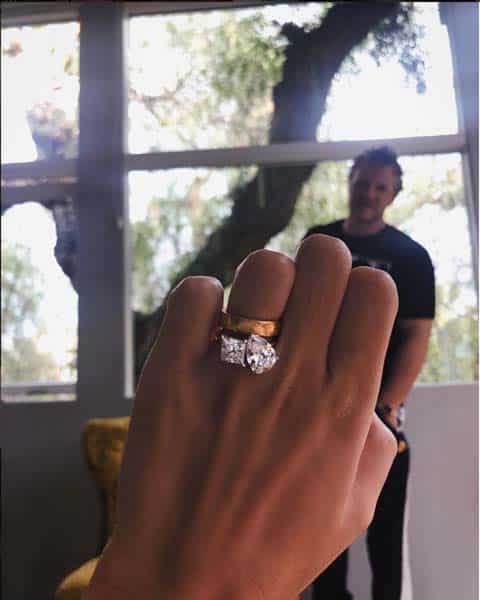 It took four months, but it looks like Sebastian finally figured out how to change that paperclip into a diamond ring.

And not just any diamond ring. No siree Bob.

The Emily Ratajkowski engagement ring is set with a pear shape and princess cut diamond and both look whopping huge! If I had to guess, I'd say that pear shape is at least three carats and the princess cut is two carats or more.

Of course, it's pretty hard to guess the carat weight of a diamond as pictured on a hand with any degree of accuracy. So, you get that those are just rough estimations, right?

The actual size of the diamonds could be larger or smaller. It's almost impossible to tell from the photographs of the Emily Ratajkowski engagement ring on Instagram.

Now Guys, don't get yourself killed looking at the rest of Emily Ratajkowski's photographs on Instagram. It's not my fault if you do.

"What am I doing? Oh, this? Well, you see, I follow this guy Todd Gray on Instagram (he's a diamond guy) (doh!) and he reposted this picture of this girl's engagement ring on his feed."

So, you can just blame it all on the diamond guy…

She can’t stay mad at me for long.

We’ve got this ring thing to take care of.