Kat Dennings Engagement Ring Is Stunning! Congratulations to Kat Dennings and Andrew W.K. on their engagement.

WandaVision actress, Kat Dennings announced her engagement to Rocker Andrew W.K. on Instagram. The tagline on the photo reads "Don't mind if I do."

How cute is that?

The couple's engagement comes only weeks after they went public as a couple on Instagram. Hey, what can we say? When you know, you just know. 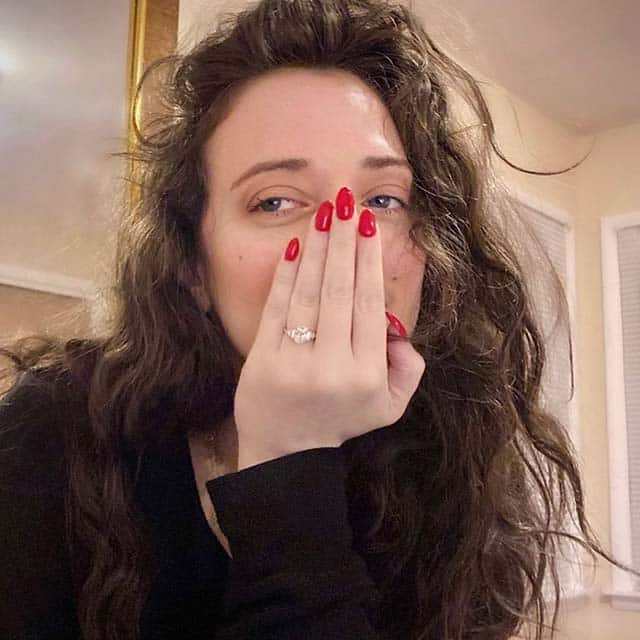 Let's talk about the ring. The center stone appears to be an oval-brilliant cut diamond. It appears to be set between trapezoid-shaped diamonds with a trillion set below that. Of course, the picture is not very clear, so it could be two rows of step-cuts and a smaller accent stone at the bottom. 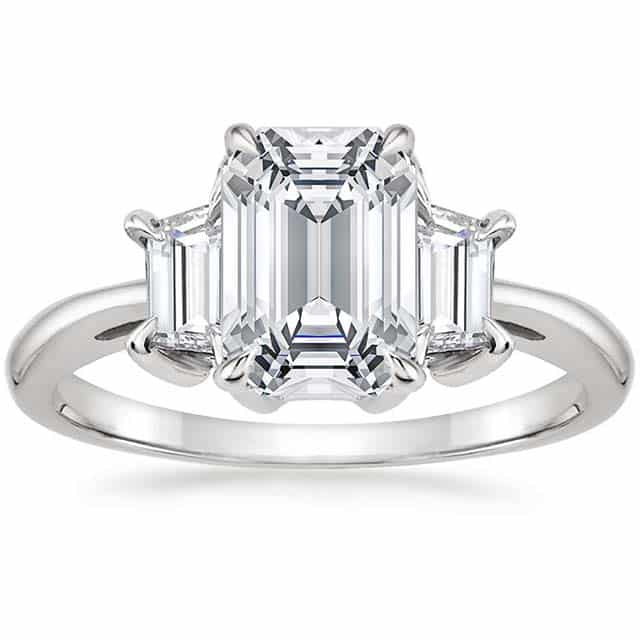 One of the things that makes Kat Dennings engagement ring stunning is the way the light wraps around the finger. The cascading effect of the side stones tapers the light and creates a slimming effect.

However, the setting is also available for the most popular diamond shapes. In that case, you aren't stuck with an oval if you prefer a different shape.

And that's good because you don't want to copy Kat Dennings' ring and steal her thunder. You want a ring style that represents your individual sense of style. 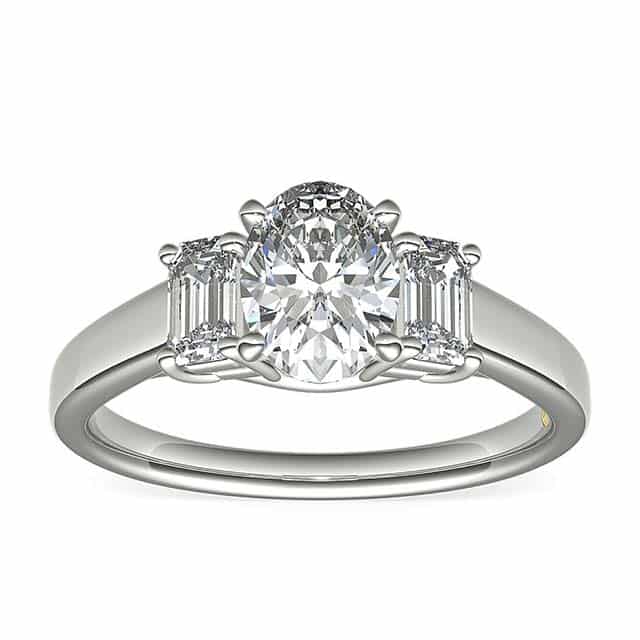 The basic design of this Zac Posen 3-stone ring from Blue Nile is similar to the one above. However, the ring shank is wider at the top and tapers as it wraps around the finger.

Many people prefer a slightly wider band and the tapering effect it has on the finger. We chose an oval-shaped diamond for the center stone this time around to keep things interesting.

One of the things we like about this particular ring is the way it looks from a side profile. The cathedral style setting creates a bridge effect that is visually striking.

Of course, the ring is available for the most popular shapes of diamond center stones. That way you can take your pick and create a custom look that is all your own with a style similar to Kat Dennings'.

Add Some Color to Your Life: 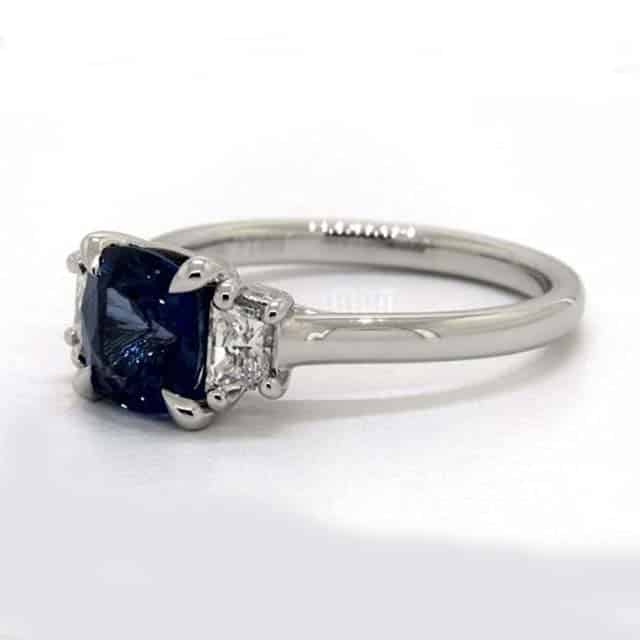 In this case, their client chose a cushion cut blue sapphire weighing 2-carats. Sapphires are a good choice for an engagement ring because they are one of the more durable colored gems.

That might explain why so many people choose rubies and sapphires as alternatives to diamond engagement rings. Lab-grown diamonds are also a popular choice, but be sure to read our tutorial before you buy. 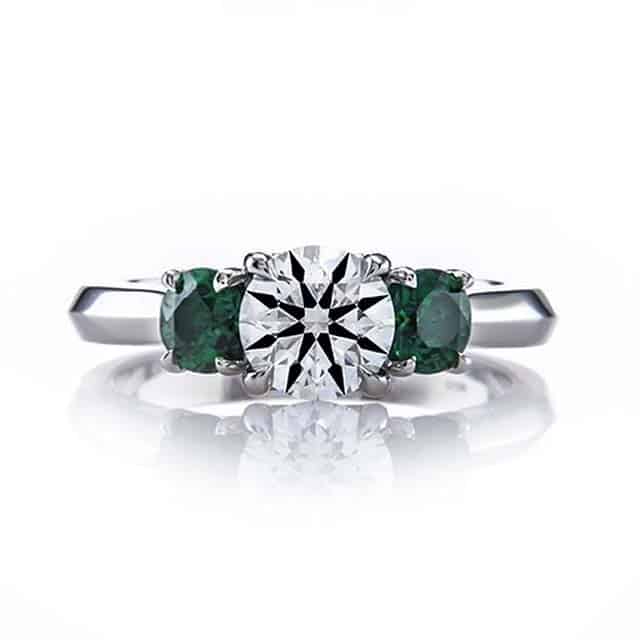 The engagement ring my son proposed with is the Diana 3-Stone by Brian Gavin. In this case, the accent stones are 4mm green Tsavorite.

My son originally expressed a desire for green emerald accent stones because that is Rebecca's birthstone. However, green emeralds are too soft to be set in a ring that will be worn daily for a lifetime.

We chose green Tsavorite for that reason and nobody can tell the difference. The contrast between the two colors creates a look that is striking and unique.

However, it's the Black by Brian Gavin ultra super ideal cut diamond in the middle that steals the show. Brian Gavin is a fifth-generation diamond cutter who produces the most spectacular looking diamonds I've ever seen.

Cluster Around And See the Incredible Sparkle: 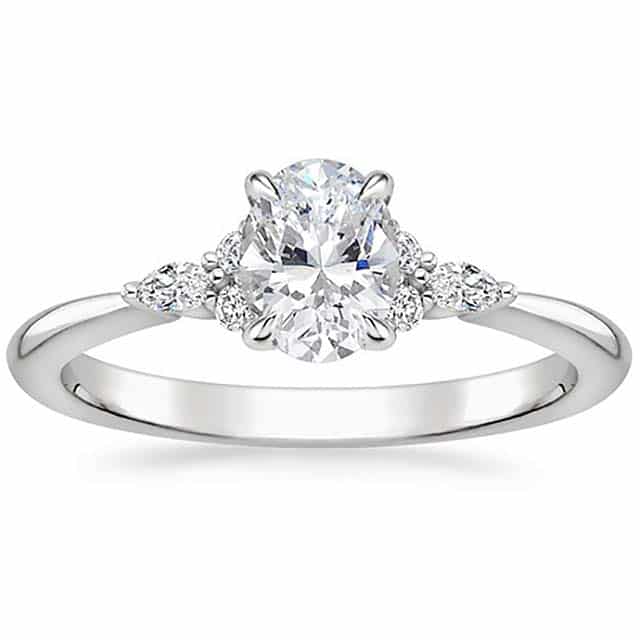 If you're on a budget, then you can create the look of Kat Dennings' engagement ring with a cluster of smaller diamonds. The Nadia Setting by Brilliant Earth accomplishes this feat beautifully.

The cluster of smaller diamonds will create a similar volume of light to that of larger accent stones. However, smaller diamonds cost less than bigger ones, so you'll save some money at the same time.

We also like the overall delicate look of this three stone diamond ring. But don't be fooled by it's dainty appearance because it's build nice and sturdy. 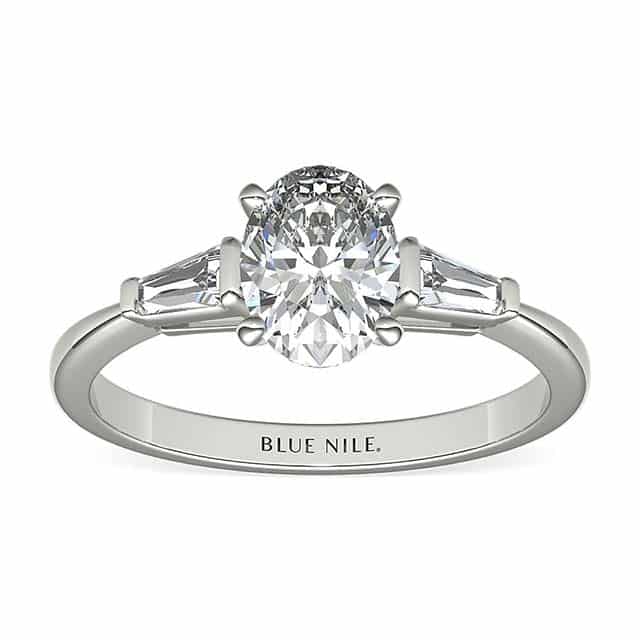 The classic tapered baguette 3-stone setting from Blue Nile is one of the most popular styles of engagement rings. It's pictured here with an oval-shaped diamond in the middle.

This timeless classic is available from Blue Nile for all the most popular diamond shapes. As you can see, the tapered baguettes stretch out across the finger to create the same effect as Kat's ring.

In that case, there are many different ways to create the look without duplicating her ring exactly. Of course, there is nothing wrong with using celebrity engagement ring styles for inspiration. 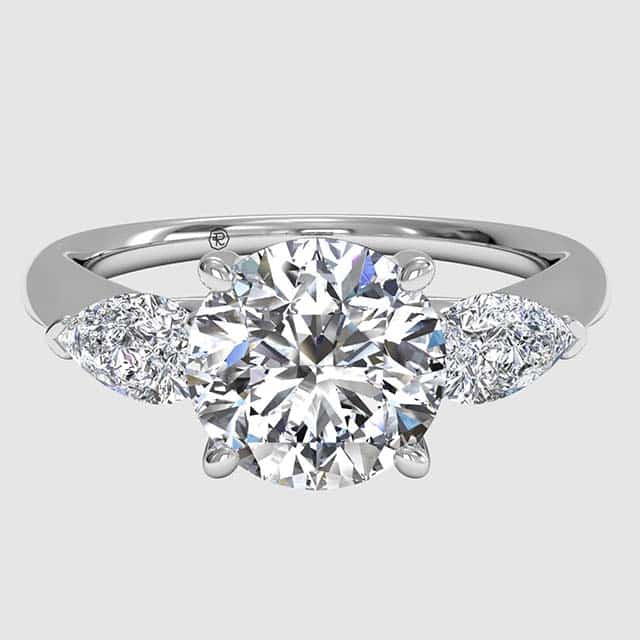 The pear-shaped 3-stone ring by Ritani is another timeless classic. In this case, we chose a round brilliant cut center stone because that is our favorite shape.

However, you can also order the ring for a princess cut center stone. We've also seen this ring style with an oval brilliant in the middle and it is stunning.

As you can see, the combination of the round and pear-shaped diamonds creates the same effect of wrapping light around the finger. It also tends to have a slimming effect on the finger and can make your fingers look long and slender.

Regardless of what ring style you choose, we hope that you'll let us help you pick out the diamond. Our diamond concierge services are free to the public and take the guesswork out of buying an engagement ring.