How To Use The Kimberley Diamond Act To Combat Diamond Scams

The United Nations General Assembly established the Kimberley Diamond Act of 2003, also known as the Kimberley Process Certification Scheme. The act intends to prevent rough diamonds from being used to fund global conflict.

It requires that diamonds be certified as conflict-free before they can be exported and imported. The act has successfully reduced the trade in conflict diamonds, but it has been criticized for not being compelling enough and not providing adequate human rights protection. 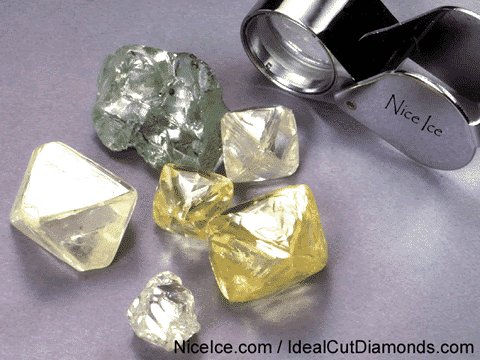 Every legitimate diamond dealer we know takes the Kimberley Diamond Act conditions seriously. First, only a psychopath wants to contribute to chaos and human suffering. Second, it's good business to strictly adhere to regulations that have the potential to end your way of life.

Under those conditions, we usually delete inquiries like the one below, but we realize that this one presents a humorous learning opportunity.

"Good day sir, My name is Fred Frank from Cafufu village in Angola. I am currently staying in South Africa. I am a 3rd year student at ( Wits University ) Johannesburg South Africa where i am currently studying political science. Actually, my father was a diamond mine owner in my country Angola. But had problems with the Angolan government over the issue of the ownership of the land."

"According to the new law in my country over mining rights, the government wanted my father to surrender the mine as by are constitution provided. As a result, my father sues government to court, and in the process of court trials, he died of heart attack. After the burial of my father, I found 3 pieces of stones in my father's tresure box in our family house in Angola."

"I don’t know much about diamonds and I am afraid I don’t want the Angolan government to know about it neither should I want the South African government to know about it too. I came back to South Africa where i am currently studying with these 3 pieces of high quality rough (uncut) diamonds white stones. A stone of 47.4 carats, 20 carats,and 10.3 carats.. It is very clean and has no crack or spot."

"I want to sell these stones and use the money to pay for my school fees and graduate from the University. I need a serious buyer who can come down to South Africa and see these stones and then, we can take it from there. Contact me on my email address if you are interested to buy. If you don't deal on diamonds, please help me find a buyer. Best regards, Fred Frank."

Needless to say that Frank's story is absolute rubbish, and this is a phishing scam targeting the diamond industry. Under the usual circumstances, we would delete this email and continue on our merry way. But where's the fun in that?

Let's have fun with Frank, who claims to know nothing about diamonds (but knows enough to provide the carat weights and clarity characteristics). For example, shouldn't we ask Frank for photographs of the diamond rough before we book a flight to Angola?

Yes, we should. After all, if I'm going to be a "serious buyer," then it's only fair to misrepresent myself as being interested in being ripped off with this Nigerian Diamond Scam.

The diamonds offered by Nice Ice, Inc. via our websites are purchased from legitimate sources not involved in funding conflict and comply with UN resolutions. We guarantee that our diamonds are conflict-free based on personal knowledge and written guarantees provided by our suppliers. We guarantee that no diamonds listed on this website have been purchased in breach of UN resolutions 1173, 1176, 1306, and 1343.

The Kimberley Diamond Act of 2003

The Kimberley Diamond Act of 2003 aims to stem the flow of illegal black market diamond rough by requiring certificates of origin for diamond rough being exported or imported to countries that choose to participate.

Under the Kimberley Process (KP), rough diamonds mined from legitimate operations are sealed in tamper-resistant containers and certified conflict-free by a strict system of forgery-resistant documents and serial numbers. This documentation is re-certified each time a rough diamond crosses an international border.

Does the Kimberley Act Apply to Rough or Polished Diamonds?

Although the Kimberley Act focuses on diamond rough, we can attest that it creates challenges in shipping polished diamonds across borders. In our experience, the customs departments of major countries of diamond imports, such as the United States, Canada, and European nations, are exceptionally zealous and strict in enforcing the demands of the Kimberley Diamond Act.

As diamond dealers, we are required to source the diamonds we sell from suppliers who comply with the provisions of the Kimberley Diamond Act. Those sources must assure us that the diamonds have been mined and processed by legitimate means free from conflict.

Because of the Kimberley Process, more than 99% of all gem-quality diamonds are from conflict-free sources. But the diamond industry will not stop its efforts until conflict diamonds no longer exist and the illegal trafficking of conflict diamonds ends.

Is the Kimberley Diamond Act Foolproof?

While we'll be the first to admit that the Kimberley Diamond Act of 2003 is not perfect, the reality is that the diamond industry is consciously acting from within to protect the integrity of the diamond market by attempting to police the traffic of diamond rough mined from legitimate sources.

The unfortunate reality of the Kimberley Diamond Act is that the laws created on behalf of its concept are a lot like drug laws in the degree of their effectiveness. In other words, those people who tend to be law-abiding citizens and who would already conduct their business lawfully, morally, and ethically were doing so before the law's inception. In contrast, those prone to participating in illegal activities will continue to do so regardless of the rules and procedures in effect.

If laws were effective, marijuana wouldn't be one of the largest cash crops in America today. Similarly, half of Hollywood wouldn't admit to having ever had or currently participating in rehab for cocaine abuse.

The vast majority of diamonds mined in Sierra Leone result from the efforts of good, hard-working people who rely on the mining industry for their livelihood. People who deserve a chance to earn a living through honest employment.

Arguably, the economic resources found in Sierra Leone are the focus of much of the bloodshed that occurred in the region during the civil war. However, it's also true that without the efforts of legitimate mining establishments within the area, the only mining that would occur would be at the hands of miners held at gunpoint. Furthermore, without the intentions of the Kimberley Diamond Act that the movement and subsequent sale of those conflict diamonds would be uninhibited, free to enter the market, and be sold without a trace.

We acknowledge that tragedies occurred within the Sierra Leone region due to illegal mining activities spurred by the activities of their civil war. However, we also recognize the importance of promoting economic development within the area through the efforts of humane mining operations conducted by legitimate mining operations such as the De Beers Diamond Trading Company (DTC) and other legitimate mining ventures.

As responsible diamond dealers, we make every effort to ensure that the diamonds we sell are "conflict-free" by supporting the legitimate diamond trade. For those reasons, we wouldn't dream of buying rough diamonds from a shyster like Frank or anybody else. Similarly, we only recommend lab-grown diamonds from trusted sources, but we'll open that can of worms another day.